If you haven't noticed the little Twitter section in the sidebar and have no idea what Twitter is, well, you are probably my age. If you were young and cool and with-it, you'd already know what Twitter is and probably would already have an account.

If you do not, you can read about what Twitter is at Wikipedia, but that doesn't explain the "why". If you Google for "Why Twitter", you'll find a lot of people trying to explain "why", but I don't think any of them really succeed. In fact, I tend more to agree with the various "Why Twitter Sucks" sentiments.. and yet, there I am, using it.. why?

Well, in my case it is a way to say things in the sidebar that I don't have any other place to say, such as "I'm out all day today", but I don't need Twitter for that.. though if the people who do want to know my whereabouts want a quick way to know that, Twitter would be useful for them.. but I can't think of anyone presently "following" me (that is, getting my Twitter updates) for whom that would matter. So there has to be more, right?

Well, yeah: now and then the people I follow post links to brand new posts that haven't reached RSS yet, so that can be helpful. I do that too if I think there's broad enough interest.. which is rarely the case. Also now and then people seek and give advice, and that can be interesting and useful.

It can also be inane and boring. There's one person I follow who is trying to reach some magic number of Twitter posts - I think 10,000 - and therefore dribbles out stream of consciousness all day long. Of course that's not always uninteresting, but much of it is. Tweets (a Twitter post is a "tweet") are short and therefore mercifully easy to ignore, but still, why follow him?

Because for some reason he's following me. If he's following me, he may say something "to" me, and if I'm not following, I won't see it unless he takes the trouble to send a "direct message", and he probably won't. So I need to follow him, get it? Twitter reciprocity.. you follow me, I follow you.. 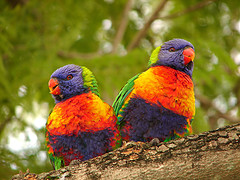 Well, except some people play Twitter games. They'll sign up to follow me, and of course I'll follow them. Then a few days later they drop me. Now it's certainly possible that they found me too boring to suffer, or objected to some political opinion I expressed, but I think many of them are just doing empire building: trying to pump up the number of people following them. They realize that most people will automatically follow anyone who follows them.. if you want the appearance of being super popular, just randomly follow a few hundred people and a large percentage will surely follow you immediately.. when you drop them a few days later, they probably won't notice..

I notice (there's a service that tells you about un-follows ). And I drop you. Not out of malice necessarily, but what's the point? For example, this morning I noticed someone I was following (because they had followed me) posted something about having trouble reaching Google with Mac OS X.. I wanted to point him at Slow Firefox DNS Mac OS X Leopard, but as I started to do so I realized that he no longer follows me.. so why should I bother? He wouldn't see the message, because he's dropped me. Instead I went in and stopped following him. Actually, I know from some of his tweets that he's a staunch Republican type, so he may have been offended when I tweeted "I've done some silly things, but I never have voted Republican".. either way, empire builder or easily offended, if you don't follow me, I don't follow you.

By the way, another possible use for Twitter is quick tech support - I'd be much more likely to make a quick response to a Twitter bleep for help than an email, and of course everyone else following you would see your plea also and might have an answer.

I am, but not as often so I took down the link here. It's "pcunix".


Cool -- thanks. I've not really seen the attraction of twitter, although I've not given it a try until now. Your twitter posts were one of the first times i stopped to consider more about why/how people may enjoy it. So I'm trying it out, and you've gained another follower now. :-)

Also - if you have no profile and no posts so that I can get some idea about you, I won't follow..


We are stuck with technology when what we really want is just stuff that works. (Douglas Adams)