I used to be interested in numismatics. I don't mean that I just had a collection of pennies or nickels, I mean that I was seriously interested. I studied books about the history of coinage, the history of the U.S. Mint, I learned about and even owned a few "pattern" coins (these are coins minted outside of their actual release date, usually to show to Congress for approval).

I lost interest after prices started going sky high in the 80's. It didn't help that it became harder to see small details as my eyes aged. I sold off almost everything a few years ago and now only have two remaining coins: an 1878 silver dollar and an 1855 one cent piece. That's all I kept, and I can't even tell you why I kept those two: they aren't particularly rare or unusual.

I came across those two coins the other day and realized that I still have some interest in this subject. However, even though prices have calmed considerably, I don't want to invest any money in this hobby and I really don't have any place to keep and display a collection anyway. I filed that under "impractical".

This morning I had an epiphany. I can "collect" coins again - I can do it virtually. There are thousands, maybe millions of coin photographs on line now. Most are copyrighted, but for a virtual coin collection, the thrill is in the hunt: all I need to keep is a link to the pictures I "collect".

I think this could be a lot of fun. Creating a virtual "type set" (one each of each major design and type) would be trivial; creating a date set (one of each date and mintmark for a particular series - like all Lincoln cents from 1909 to 1958) might be a little harder, especially if you search for better condition. Finding die varieties could keep you hunting for years..

Here's a picture a a Flying Eagle Cent. This was the first "small" cent minted in the U.S. The first year of issue was 1857 but patterns exist from 1854 to 1856 - I owned one of the less expensive patterns at one time. 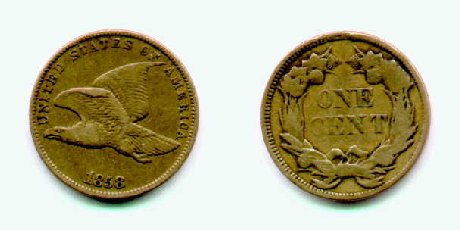 The owner of that picture asks:

If you would like to use any of the images for your own personal numismatic web page, club web page or numismatic newsletter then please do so. The only thing that we really ask is that you not redistribute them, by themselves or with any other collection of images, in a commercial manner or in any other similar virtual library of coins and/or tokens web site. If you do use our coin scans then it would also be nice, however not required, if you would give credit to us or our web site with a link back to this web page.

That was easy enough to find. Finding pictures of all the various Flying Eagle patterns is going to be much harder.. setting a Google alert could be helpful once you think you've exhausted all existing resources.

You could use the same idea to collect stamps, antique cars, whatever. Your collection only needs a little disk space and isn't an attraction for thieves. Put your collection in a slideshow and enjoy it whenever you want.

I've started "collecting" already. This is going to be fun.

It struck me that you could make an Internet business out of this - buy up the rights to photos of rarer pieces and resell to virtual collectors..

As a kid I used to collect coins, I wonder though....

Is it the same just having the images? To me I don't think it would be not for coins at least.

Sort of like collecting pictures of places you want to visit and not actually going to see them.

Well, you still have the thrill of the hunt and you can always look for better photos..

I think it could be particularly fun to look for die varieties..

I used to be into coin collecting too. One of my older ones is a U.S. Large Cent from 1823. Not worth much, but I find it fascinating, when I imagine the history this coin has seen.

When this coin was new, electricity didn't exist. The steam engine was relatively new. The US was a fledgling country.

Herds of wild buffalo and Indians still roamed the Great Plains. There were plenty of blank places in North America, where Europeans had never set foot.

When this penny was new, it was only 20 years after Lewis and Clark explored West of the Missouri. Maybe Clark himself ownd this coin at one time (Lewis died in 1809).

Then maybe it sat in a jar, or a box, and was forgotten about for years. Or maybe it was considered a lucky penny, and was passed on from grandfather to grandson...Who knows?

And how, almost 200 years later, I'm holding the same coin.

Kinda cool, when you think of it.

I had a 1798 also - so worn you could barely see the date - think of the pockets that had been through!


A C program is like a fast dance on a newly waxed dance floor by people carrying razors. (Waldi Ravens)