I happened to read an article about revenue sharing sites that mentioned "Question and Answer" sites. These are sites where people post questions and others post answers. The resulting pages carry Adsense advertising and there is some method of sharing revenue with either those who provide the questions, the answers, or both.

There are a number of these around, but I only signed up with two: WebAnswers.com and AnswersPay.com. These both require a Google Adsense account (Webanswers requires answering 10 questions before you can give them your Adsense information).

My first reaction to the questions was "Are these people really this dumb?". Unfortunately for the future of this planet, the answer is "Yes".

The "AnswersPay" site is the worst for outright stupidity. 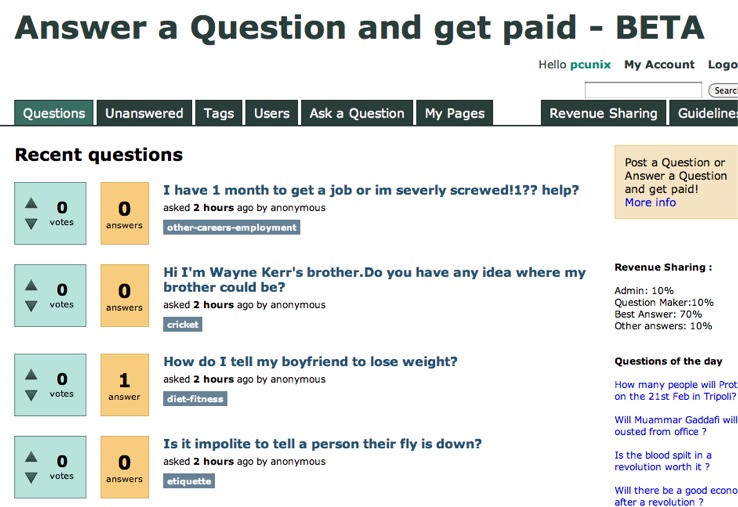 Sure, some of this is probably young kids or drunks or peope just goofing around. But all of it?

The "Webanswers" site has some of that foolish stuff, but there are more reasonable questions. The questions are broken down into categories, which makes it easier to find things you might care about answering. 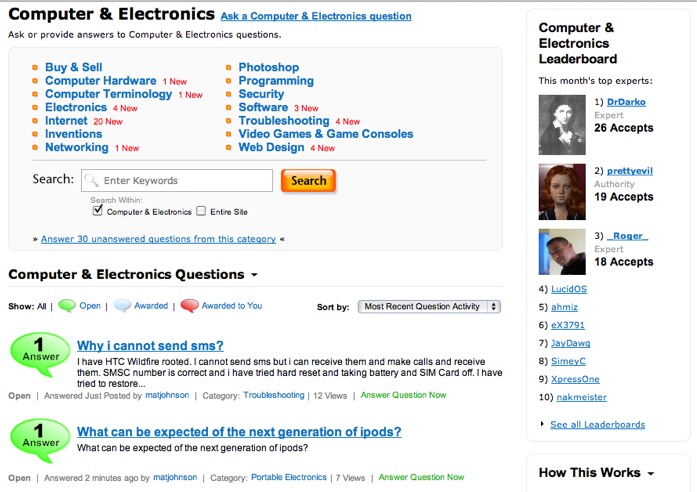 However, while the questions may be more intelligent, many of them could be answered in seconds by a simple Google search. Why on earth would someone post here and wait hours or days for an answer they could have had in seconds from Google? That just baffles me.

I do have to admit that a large part of my living has always come from answering questions that people could have more easily looked up themselves, so perhaps I should not complain too loudly?

Would you really be able to make any money doing this? I can't imagine that it could amount to much. Webanswers seems to be pretty honest about that - at How much money can be made by answering questions on WebAnswers.com they say:

Last month users made over $2,100 on WebAnswers.com by answering questions. The top earners were making between $10 and $20 dollars every single day where many more were able to buy lunch for free if they chose to spend their earnings like that.

Those top earners may have answered more than 1,000 questions per month (I'm guessing from the Monthly Leaderboard stats). That's about 30 per day or more. I spent about an hour browsing and answering questions yesterday; I managed 15. That might give you an idea of the effort required. Two hours work where you MIGHT earn $20.00 or less? No thanks.

Laziness and plagiarism abound in the answers. People cut and paste directly from Wikipedia and other sites. Supposedly this is not allowed, but the policing of this comes from member reporting, so it's actually common. You'd therefore be competing with Wikipedia for "best answer" in some cases.

I'd also be concerned about collusion. Sites like this are vulnerable to orchestrated voting, and it is voting that determines if your answers are the "best" and therefore eligible for earnings. All in all, I don't see this kind of site as a good place to earn extra income.

However, I could be wrong, and I suppose if you are out of work and have nothing better to do, anything earned is better than nothing.. Feel free to check them out for yourself and see what you think:

A related question for those who care to comment: are people really getting dumber or is it just that easy access to the web and large numbers of young children makes us think that? I certainly hope it is the latter.

Update 11/2/2015: Both those sites are gone. I recieved the following comment from "Dave", a former member at Webanswers. He asked that I add this information:

I just happened to stumble over your older post that appears to be mostly talking about webanswers dot com. I even recognize and remember the three members pictured on your sample image of the site. One of them was active to the end.

Too bad you did not understand what was there. I made several thousand dollars from my efforts during the years I worked the site, but the gravy train has now ended. I found your blog while looking for details about the death of the site.

The biggest thing you did not seem to catch on the fly by is that the answers posted on WebAnswers were accumulated in a huge database that was indexed on search engines. When someone googles a question, the content on WebAnswers was part of those instant answers that came up.

The key you missed was that the questions were asked and answered long before the actual customers thought of the question, and sat waiting for someone to think of a match. Those future researchers were the customers for WebAnswers. Those future customers were the ones clicking ads to earn revenue for members who forgot they even wrote anything about any particular topic by the time it earned some revenue, again and again.

It was always a legitimate way to earn revenue but due to a wide range of policy changes with Google combined with site software issues, there is no longer any way to earn from working the site, even if it comes up at all.

After a long ride with an old friend, I'm now researching the obituary of the site. The content in your blog is still completely wrong, but there is no longer any opportunity to earn from the site.

I don't think it's a case of anyone getting dumber (although genetics propagates the worst human traits, as well as the best), but more likely a general increase in laziness. After all, Tony, you and I, and others like us in our line of work, make money to some extent from others' laziness. I can't recall how many times I've solved a trivial problem for a client, a problem that took but a minute or two of thought, and at worst, a few more minutes of research, often from materials right at hand, a problem that almost any reasonable person could have solved.

When a client calls (as happened in one memorable case) to complain that the printer isn't working and then thinks I'm some sort of wizard because I suggested he check the network connection (which was unplugged in this case), that's nothing more that a case of laziness. I can't speak for others, but checking connections seems so obvious. Did the client not do that because he was too dense to figure out such a simple thing or was he too lazy to be bothered and instead called me because he has a support contract?

So, it doesn't surprise me that sites such as WebAnswers.com and AnswersPay.com are not only up and running, but are willing to pay for answers that almost anyone could produce by merely hitting a search engine. We (in the generalized sense) have become a lazy bunch.

I put the blame entirely on the world wide web. Over the last 15 years or so there's been a definite drift away from longer form texts - i.e. books - that have the time and space to develop concepts, and build up a thorough understanding of an area. Why spend ten hours reading a book and developing a thorough grounding in its subject matter, when Google will find the answer to your exact question instantly, on a web page that can be read in ten minutes flat? From past experience on Yahoo Answers it seems that goes just as much for many answerers as it does askers. If something can't be understood in seconds or minutes then Wikipedia gets quoted verbatim, regardless of whether it even deals with the specifics of the actual question.

You see the effects of this all the time online: people advancing a "solution" to an issue and citing some authoritative web page or other. Meanwhile someone with real understanding can see immediately that the souce is an irrelevance, because of some blatantly obvious factor the ignorant Googler didn't know exists. Does it make sense to enter Cisco IOS commands at a Windows command prompt? Of course not, but I've seen that exact error made: the ten second Googler that doesn't understand either is unable to tell the difference.

Yes, I love the Windows answers to Linux questions.. :)

I did get awarded "Best Answer" for one of the questions I answered yesterday:

I did get awarded "Best Answer"...

That, and five dollars, should get you lunch at Booger King or McDonald's. :)

How selective have you been answering your questions? Have you been skipping over questions that simply seem too dumb to be worth bothering with? IME the most common case is wanting a very specific answer to a very vague question. "What is the permanent Solution to Stop Computer Freezing?" seems to fall in that category.

Yes, quite selective, although I did take a crack at that one..

I don't know: I suppose if I have a spare hour where I have absolutely nothing better to do, that would be a reasonable place to go, but those hours don't come up very often!

"That, and five dollars, should get you lunch at Booger King or McDonald's. :)"

No, actually the "Best Answer" is what makes you eligible for earning, so that COULD end up with enough for lunch :)

And, I actually made $1.30 from webanswers today.

Not much for an hours work, but it is real money..

And, I actually made $1.30 from webanswers today.

Ooh! That at least covers your drink at McDonald's or Booger King -- but not the whole lunch. :)

I agree with your articles. Yahoo answers is really the best Q and A site! Unfortunatley it does not pay, but users seem to be happy to use it anyway..

Thanks - I fixed the link.


Within C++, there is a much smaller and cleaner language struggling to get out. (Bjarne Stroustrup)