Thanks to one of our readers (thanks again, Donal) I got a Google Wave invitation Friday morning. By the way - if someone says they have sent you an invitation, you may have to wait: Donal said that he had sent that invitation on Monday. I don't know if Google is just slow in processing these or if they are deliberately doling them out slowly (probably the latter), but once you actually get your invite, you can be up and working in minutes.

I started out using Wave in my Firefox browser, but quickly switched to Waveboard, a Mac Wave client. It's not that it's all that much better than running Wave in a browser; it's just that I like having it in its own Dock icon.

I created a few waves and soon had a few conversations going with other Wave users who I added to the Waves. My contacts as supplied by Google seem to be people from my Gmail contacts who also have Wave accounts. I recognize only about half of them, though: probably because they used a different name in email than they do in Wave.

My first conversation was with Donal, thanking him for the invitation. That could have just as easily been done in email or chat, of course; there was no specific reason to use Wave. However, in the next conversation, Wave was useful.

I had started a Wave titled "Until everyone can use this, sure is useless :-)", in which I lamented my inability to bring in people who don't currently have Wave accounts. I have uses in mind for Wave, but without being able to add in non-wave users, I can't do anything useful. I added in everyone in my Contacts list and a few comments soon came.

One of the people happened to be someone I do business with and his appearance reminded me that there was something I wanted to talk to him about. We started doing that in a "private" conversation within the existing wave, but then realized that it was better to spawn it off to a new Wave. That's very easy to do and is an advantage of Wave over Mail and Chat - not that you can't peel off from either, but it's easier in Wave.

I also started a "public" Wave. That's a Wave that anyone can join (assuming you have already been blessed with a Wave account). You create a public Wave by adding "public@a.googlewave.com" to the list of people you want to be able to read the Wave. With that, it's now open to the world. Presently, there is no way to post a link to a public Wave; you have to search within Wave to find them. For example, to find my Wave, you'd search for "with:public Tony Lawrence's Unix, Linux and Mac OS X Tips". 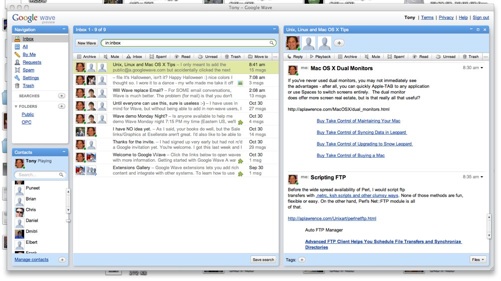 Note that it's perfectly possible to insert advertising into your Waves. I did that here with simple text links, but you could put in Javascript with a Wave Gadget. How long before there's an Adsense Gadget? I'd guess not very long.

I started another Wave called "Will Wave replace Email?". I opined:

For SOME email conversations, Wave is much better. The problem (for mail) is that you don't necessarily know ahead of time that a conversation would be better in Wave. So... once this is ubiquitous and we all understand that, we might just start using Wave instead of email at the beginning of a conversation?

Two people have commented on that so far. One said:

If Google is going to succeed with this they're going to have to do two things.

1. Make it so user@googlewave.com is a real e-mail address that can be used by anyone. Regular e-mails sent to these addresses will automatically turn into Waves for the Wave user.

2. Make it so that a Wave user can create a wave and add people to it that use regular e-mail. Waves will get sent to standard e-mail users as regular messages and get sorted into threads the way their e-mail client chooses to do it.

I suspect that's exactly what will happen. A Wave isn't always better than email, but sometimes it is and you don't necessarily know at the beginning of a conversation that it would be better as a Wave. For example, suppose that halfway through a long back and forth email discussion you need to bring someone else in. With email, you'd have to forward all the prior messages - that can be tough for the recipient. With Wave, you just bring them in and they can replay the previous messages step by step if they want to. That's a powerful advantage over email and it's why, if this does become ubiquitous, many of us will probably just use Wave instead of email.

That could really change things, couldn't it?

I (or rather my wife) just got some.

I'm willing to pass these out to regulars here - first come, first served.

Note that you MIGHT want to wait if you have asked Google. If you accept an invite from me, you don't get any invitations of your own. If you wait for Google, you will.

Of course, eventually they will just open it up. But we have no idea how long that will take.

If I DO ask Google to send you an invitation, it may take a week for you to get it.

Note that I said "regulars" - authors, people who have commented previously.. not someone coming here for the first time, sorry.

The more I play with Wave, the less chance I see for Twitter and Facebook to survive.

Wave does the same things, but better, even now.

If everybody had Wave, what advantage is there to either of those?

Forums, too. Subscription based content. All better done in Waves.

It could replace or augment just about everything. I mean, we're having a conversation about this on one of your Waves and it just seems to work so well.

And it's still Preview!

Still missing so much - and yet already so obviously useful!

Disruptive technolgy for sure!

If you have Wave, this search will find my open (public) Waves:


Choose a job you love, and you will never have to work a day in your life. (Confucius)