What have you done for me lately, Firefox?
© May 2015 Anthony Lawrence


I read at Firefox Fightback that Firefox wants to regain market share and a few highly placed folks have left. Market share? In this household, they have none at all. There was a time when I ran and recommended Firefox everywhere, but bloated and crash prone code caused me to move to Chrome in 2009. Since then, I've been happy wih Chrome until the very latest version, but now that has been freezing up on me at times so I thought I might take a fresh look at Firefox.

If the visitors to this site mean anything, I'd say Firefox is still a strong contender: 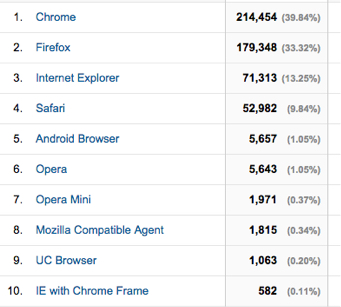 But Wikipedia says it is currently only "the third most popular web browser", and StatCounter says it's a poor third place at that (StatCounter Global Stats - Browser Market Share).

Firefox HAS been improving. They've been doing a lot since I dumped it in disgust six years ago. Some quick reactions:


Am I a believer again? I don't know. I'll try it out for a while and see how I feel.


Home
->
Websites, Blogging
-> What have you done for me lately, Firefox?


Don't get suckered in by the comments … they can be terribly misleading. (Dave Storer)