There are many, many places where a content provider can publish their content. You can join a blogging site like Hubpages.com, Blogger.com or one of the myriad others. You can go it alone at your own site as I do. But whatever you do, you are faced with a problem: who reads it?

Yes, you may have some readers who reach you by RSS or who have signed up for your mailing lists. Still more may come by way of Google search (or Bing and the rest of the search wannabe's). That was the path to success in the 80's and 90's, but those sources have been waning in importance and social media has become where the great mass of readers find content.

Indeed, there are now content publishers who only use social media. 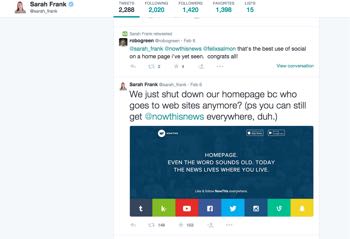 The rest of us use social media primarily to post links. Facebook would like to change that and have us create our content directly on Facebook. It's easy to yawn and think "Well, isn't that what Google does with Blogger?" but it seems to be more than that. No big names publish in Blogger, but Facebook names the New York Times, BuzzFeed, National Geographic, NBC, The Atlantic, The Guardian, BBC News and more as launch partners. That's hard to ignore.

What attracts them? Speed, primarily - "instant" is the key word, particularly on mobile. Facebook says "Instant Articles makes the reading experience as much as ten times faster than standard mobile web articles". They'll also offer more tools, noting publishers "can have the same tools that an app developer has. They’re not stuck with what the mobile web can offer."

Could Google do the same thing with Google Plus? I bet right now they are wishing they had. It may not be too late: Facebook hasn't yet opened its gates for people like me to join in, so there is a window of opportunity. Google could also flood its launch with existing Blogger publishers, so they might have a leg up there.

It's going to be interesting.

Facebook Instant Articles: A Slippery Slope For Google To Do The Same, Hurting The Web?

Facebook Brings The New York Times, BuzzFeed And Others On Board With “Instant Articles”


We are standing on a whale fishing for minnows. (Joseph Campbell)