The cost of data
© May 2015 Anthony Lawrence


I just read another article about Google's desire to become your mobile wireless provider. I made a sour face when I read this:

But what has me really excited about Project Fi is the price. You pay a base $20/month for, as Google puts it, "all the basics (talk, text, Wi-Fi tethering, and international coverage in 120+ countries)" and then you pay $10 per GB of cellular data you use. If you don't use all your data you'll get a credit for whatever you don't use. For once you'll be paying for data you use and no more.

Well, yes, it would be refreshing not to have to pay for unused data. Most data plans stick you hard if you go over your plan, so that encourages you to buy more than you are likely to use and increases the providers already obscene profits.

Google is likely getting gouged by Sprint and T-Mobile (they are buying from them), so it is even more surprising that they are at least giving you a break like this, but even $10 per GB is still too much money.

It's hard to find good data on the cost of that data to the wireless providers. Yes, they have infrastructure to pay for, but remember: they had all that before there were smart phones. Sure, talking is far less bandwidth, but once it gets off the towers and into the wires, the cost is ten cents per GB or less:

Source: What Does a Gig Cost?.

We pay more to get less in the United States. Yes, other countries subsidize some of this through taxes, but it still shakes out that we pay more. It's annoying, and particularly so when you find yourself needing to pay those rates while doing work you'd normally do at home or in your office for far less. That's my problem every time we go on "vacation" (an ancient word that means "working somewhere else for a week or so" for self employed people like me). I need internet and the only way I can reasonably get it is through a Verizon Jetpack that costs me $70 a month for a miserly 8GB of data. I bet that's $65 or more of pure profit for Verizon!

At home, we suck through that much data pretty quickly. 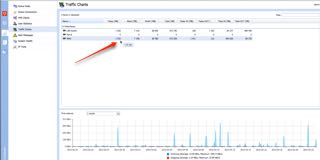 And that doesn't even include the movies we'll stream tonight from Netflix!

I hope Google disrupts this industry. It sure needs a shake-up!