It's a little shy of two months since Google integrated Adsense and Analytics. I've been playing with the various report possibilities and am excited about what we will be able to learn from this.

Notice I said "will be able to learn". It's still too early to draw a lot of conclusions - there is just not enough data yet. In this period of time we've served up half a million page impressions, so there are some lessons ready to be reaped, but overall it's just not a long enough time to judge by. That's why this is called "Part One" - this subject will need to be revisited over time. I think six months might be good for Part Two and then another look perhaps after a year.

One note: Google is paranoid about advertisers disclosing anything more than gross revenue. Almost certainly this is because some publishers get better deals than others and Google doesn't want us comparing our rates to other sites. Therefor: Any and all information below that indicates click-through-rates, page views and income is completely fictional. I've made up figures strictly to demonstrate the kind of information you can get from Google Analytics. These figures are not real. I'll be reminding you of that again as we get into the details - this is all "sample data".

Probably the first place most of us would look is the "Adsense" menu under "Content": 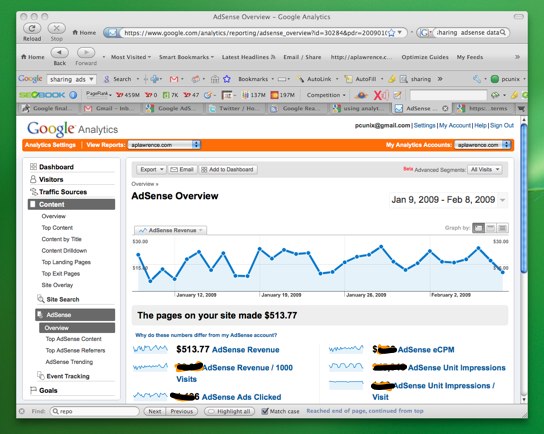 That doesn't tell you a lot more than your old Adsense reports would have. It does have some details lower down about Top Adsense Content and Top Adsense Referrers, but those are almost pointless this early on. For example, the page at my site that earned the most money in the past month only had seven more clicks than a page that earned not even one twentieth as much. If I add up the revenue from the next 9 highest click-through pages, that total is about the same as that highest page, so that page is way out of average - it could be it will always attract the highest paying ads, but with only two months to go by, I can't really say. I can't glean much from sorting by CTR or eCPM either (click on column headings to sort). Pages with very high CTR/eCPM haven't seen enough activity in two months to know if they will always generate a good CTR or eCPM. Pages that have drawn a lot of visitors haven't necessarily generated much income. It's just too early to draw conclusions.

However, there are some things we can see now. If you click on Traffic Sources->Direct Traffic, you'll find an Adsense Revenue tab has been added to this. You'll find the same thing for Referring Sites and Search Engines. For example, that might tell me (remember, all figures are bogus) that 7,000 visits came directly here and earned $20.00 in Adsense revenue. If I looked at Referring Sites, that might be 5,000 visits and $25.00 in revenue. But Search Engines could show 100,000 visits and $470.00 in revenue. If we do the math, we can quickly say that Search Engine traffic generates the most money, but isn't as much per thousand as Referring Sites. Direct Traffic is obviously the worst. Again, though, there is no point now in sorting by CTR or eCPM - there are just not enough data points yet.

You'll find the Adsense tab anywhere in makes sense. For example, in Visitors->New vs. Returning I can see that New Visitors represent 95% of Adsense income. As they represent 84% of visitors overall, it's plain that returning visitors aren't heavy ad clickers either (although that could be just because I don't run ads in the middle of the newest pages!).

You can find other oddities.


These are stats that probably are reasonable to trust after two months and a half million page views.

If you have a low traffic site you can't infer a lot from these reports. However, even with quite a lot more traffic, you'd be rash to jump to firm conclusions just yet. We've only had these reports for two months and those two months happen to have coincided with an economic downturn. My Adsense revenue isn't down a great deal - it seems to be holding at 80% of norms, but as overall traffic is up 15% to 20%, the true picture may be that it is off much more.

The difficulty is that we're in a very unusual situation right now. Web advertising didn't exist at all when we last had an economic recession, and this particular situation is completely different than anything we've ever experienced anyway. How can you draw any sort of conclusions from any data?

I don't think we can. All the rules have changed and all bets are off. If this had been available last year, I'd probably be willing to dive in a little deeper and make some guesstimates. As things stand now, I don't trust anything.

I am, however, always interested in hearing YOUR opinions. Are you using Google Analytics new Adsense integration? Do you think you have learned anything new? How do you plan to put that knowledge to use?

RonMalon.com has some suggestions on what to look for if you do feel you have enough data to trust now: (link)


Computer Science is embarrassed by the computer. (Alan Perlis)