My wife informed me that her sister needed help with Gmail and that, as she herself was busy doing Important Things, it was up to me to teach her sister how to label and archive email.

How hard can that be? Well, I've been through this before with other people, and it can be harder than you might think. Harder than I expected it to be, certainly, so, with past frustration in mind, I prepared a graphic aid to send to my sister-in-law before actually talking to her.

I'll reproduce that graphic here so that you can laugh at my foolishness. 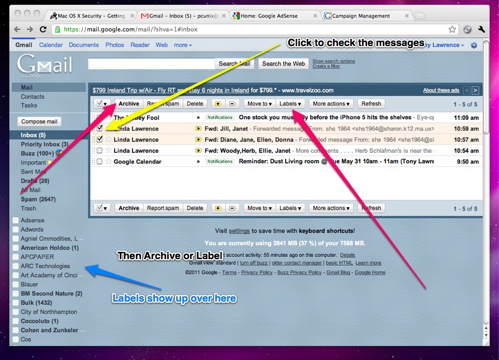 Never mind that the confusing mass of colored arrows. I could have given her something much easier - I completely forgot about Jing, which would have let me record a movie of exactly what she needs to do. That would have saved a lot of time and trouble.

If this had been a request from a customer, I probably would have remembered Jing. Maybe it was because this was outside of working hours that the neurons failed to trigger? I don't know..

Don't shoot until you see the whites of their eyes

I think I know what the problem is for new Gmail users: they only see the white area.

I don't mean that they can't see the important stuff over in the blue area to the left, but that they don't notice it easily. When something new appears there, they won't notice it. My sister-in-law was quite frustrated by Gmail labels because of that.

However, with the aid of that picture (or perhaps, in spite of that picture), she eventually caught on and I hung up while she went on to organize her mail with labels.

Except.. one more question..

"Why does it keep asking me for my password?"

I always cringe inwardly when people ask that. Of course we could set her computer to remember that password, but there are good reasons why she should not. I explained to her that sooner or later she'll get a new computer and that she'll probably have long forgotten her password by then. If the old computer is dead and gone, she'll have a problem. Not an impossible problem, but an annoyance: Google doesn't necessarily make it easy to reset a password.

Perhaps more important to her is that she is somewhat nomadic. A few times a month she visits her children and stays overnight. If she wanted to access her Gmail from one of their computers, she'd either need to set their systems to remember her password (probably not a great idea) or remember it herself. Typing it every day back home will drill it into her memory.

A few years back I was working with another contractor and it happened that we needed something that had previously been sent to his Gmail account. He didn't know his password and had to actually drive back to his office to get the information needed!

Don't let your computer remember things for you. It's bad security and is likely to cause you grief sooner or later. My sister-in-law appreciated the logic of all that and decided that typing in her password once a day wasn't all so difficult.

I always preach that people should use really strong passwords but I know that mostly falls on deaf ears. If I can convince them to use something harder that "123cat", they'll want to use it everywhere, and while I can suggest ways to have easily memorized but still unique passwords, most people just won't do that.

Having your email hacked might not cost you anything more than a bit of inconvenience, but why risk it? Gmail passwords should be hard to remember.

In the past, it wasn't very convenient to have multiple Google accounts because your login to one caused all others to use that same login. Google added some support for multiple logins last year.

Fortunately for me, my sister-in-law has no other Google accounts, so I didn't need to explain all that to her.

Next time, use Jing

I definitely need to remember to use Jing the next time I need to explain something like this to anyone.

Why not remote support? There are many free products for that and most of them are easy for the remote user to set up. Many of them allow access from a Mac client, so that isn't an issue.

I still prefer sending pictures or movies. If I log in and do it for them, not only do they not learn how to do it themselves, but they have nothing to refer back to if they need to refresh their understanding. A picture or a movie can be studied again and again.

There's nothing wrong with combining those things - in fact, recording a Jing movie of what you did is a great idea. I should try to remember that for next time, shouldn't I?


Home
->
Security
-> I wish I hadn't forgotten about Jing

Never mind that the confusing mass of colored arrows.

Is that what those are? I thought they were low-flying meteorites or perhaps misguided comets. :)

Of course, I'm puzzled as to why anyone would use Gmail, but I guess that just because I'm a grumpy old dinosaur who doesn't particularly trust large, public-access E-mail services.

Gmail (or other public services) make sense for home users. Their other choice is to use their ISP's server, but that causes problems when they switch ISP's (which is common as prices change).