Self-Monitoring, Analysis and Reporting Technology (S.M.A.R.T) is built into most newer hard drives. S.M.A.R.T records a number of "attributes" that can be reported. These are things like Seek Error Rate, Spin Up Time and more which could help warn of impending difficulties. This predictive and warning function is part of the value for products like Granite Digital's SMARTVue.

S.M.A.R.T of course can't warn you of everything. A power supply could blow without warning, leaving your hard drive dead. But many failures would give plenty of warning before the drive became inaccessible, and that is what SMARTVue can monitor.

Drive failure is much more rare than it used to be, but not so rare that you should assume your drive will never fail. Modern drives are truly amazing, and their Mean Time Between Failures is now a very large number of hours. But while I can expect that very few of my clients will have hard drive failures this year, surely some of them will. You could too.

There's another purpose to SMARTVue: benchmarking and testing. For usrs who need ultimate drive performance (capturing video, etc.), being able to benchmark and compare against another drive or earlier results from the same drive is important. Granite SMARTVue provides tools for that, too.

You can download a free version of SMARTVue from www.granitedigital.com/smartvue/index.htm (link dead, sorry) The free version is has limited functionality, but can be upgraded to the Pro version for $19.95 (or $29.95 for a version with printed manual). At this writing (June 2003), there is only a Mac OS X version; they say they will have a Windows version eventually (a similar product that does have a Windows version is https://www.santools.com/smartmon.html ). See https://smartmontools.sourceforge.net/ for a Linux tool.

Even without this, you can query SMART status on your Mac: 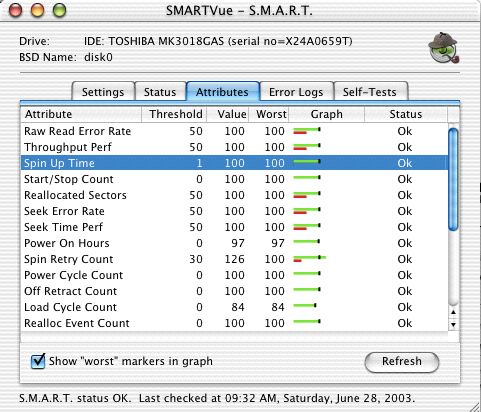 Attributes have a value of 0 to 253. Unless the drive manufacturer has provided you with documentation, you have no way to translate these numbers to anything meaningful. Look at "Power On Hours", for example. My drive has been on a LOT more than 97 hours, so that tells me nothing. Nor do any of the other attributes, except for one thing: the manufacturer also defines a threshold value for the attribute, and as long as the current value is ABOVE the threshold, everything is OK.

This can be confusing when you first look at it: a "Raw Read Error Rate" of 100 looks scary, but that does not mean that there have been 100 errors. For all I know, there may have been no errors of this kind: the only important thing is that it is above the threshold. Reported values and thresholds are manufacturer specific: a different manufacturer might show a threshold of 5 for this value. Again, the actual numbers are only meaningful if you have that information from the manufacturer. Even a change in these values can't readily be interpreted, though certainly if the values were steadily moving toward the threshold I would become concerned. In the current version of SMARTVue, Granite doesn't log attributes so that you could track these values over time, but they did tell me that is a feature they may add later.

SMARTVue checks attribute status as oten as you have told it to and will either pop up a window or send email if any value has fallen below thresholds. Since that may never happen, you can simulate an error to test that is working correctly.

If the threshold value is zero, then there is no comparison to be made: these attributes are informational, but have no problem threshold. So why report them at all? Well, your drive manufacturer might provide you with the actual meaning of the reported values. If you can get that, many of these informational attributes might be interesting to you.

S.M.A.R.T also may include Self Tests and Error Logs; if these features are present, SMARTVue can show you the logs and let you run the Self Tests. You can also run you own tests, save them, and compare them in the Results Viewer. 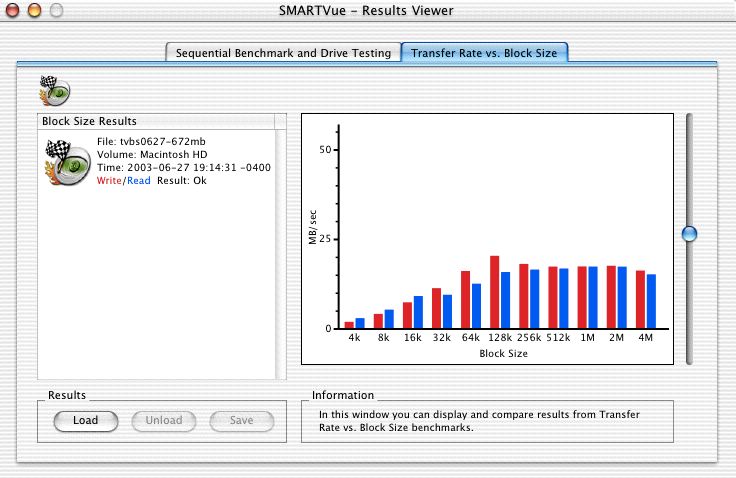 The Self Tests generate no output: it's simply OK or not. Your drive may have Short or Extended self tests; mine has only Extended, which took about 28 minutes to run. It doesn't interfere with other computer use though (other than slowing down disk access due to its activity).

SMARTVue's own testing is divided between Benchmarking, which can run either a Sequential File Transfer or try various block sizes, and Drive Testing. The Benchmarking tests can be run on a user file, which can help spot fragmentation issues.

Saving test results isn't in the window where you run the test; go up to the menu bar and choose File to see the ability to save or just move the graph to the Results Viewer. Once you have more than one test saved, you can load multiple tests into the Results viewer and compare them side by side. I found the color differentation a little hard to make out even when comparing two tests, and impossible with more than that. This was a little easier on the Transfer Rate vs. Block Size (which is a bar graph) than on the Sequential Benchmarks.

This is obviously not a utility you'll use every day. It's also true that certain kinds of instantaneous failures will just occur without warning. Still, I like to know that my drive is in good health: I have many gigabytes of important data to protect. Granite Digital's SMARTVue gives me a little more confidence.

I am running Panther, and I believe, the full install. The command line:
apl$ diskutil info disk0 | grep SMART
gave me "command not found"

Nothing to do with Panther per se: it's your hardware:

and it works ok. Hopfully it returns the "verified" message.

Thanks - I sometimes forget that prompts can confuse people. Of course in other situations, lack of prompts can be confusing too..

I took it out above.

I can`t find the smartvue, I search the entire web and seems that this software was deleted for every page where I search.
Pleasse letme know if you know where I can find it. Thanks and sorry about my english :)

You don't need it with Leopard. System Profiler, Hardware, Serial-ATA

I don`t have Leopard, since I have a couple of G4 (iMac & PowerMac) I use Tiger.
This program looks like what I want for Macs, I use HDTune on wintel PCs.
Thanks for your answer, best regards from Uruguay
Alvaro

I'm sorry - I don't have a copy anymore - that was a fair time back!


Being the richest man in the cemetery doesn't matter to me … Going to bed at night saying we've done something wonderful... that's what matters to me. (Steve Jobs)