I recently bought an Apple iBook. As Mac's now run Unix as their underlying OS, it makes sense for me to have this. I bought the 14" version with an 800 Mhz cpu, 30 GB hard drive and a Combo drive (reads DVD's, reads/writes CD's). It was $1,599.00 and arrived direct from Apple's web site just four days after I ordered it.

I'm still awash in confusion, but I do have a few first impressions.

This is a good looking machine. White case, white keyboard, thin, lightweight (about 5 lbs) and a sharp display. The battery life is supposedly five or six hours. I have a Win2K laptop also, but I only use that while traveling, and have a Linux box at my office that is my main workstation.. I think this laptop could be my machine for both office and away once I get it all set up and working correctly.

And that's my first (and probably only) gripe. I'm fumbling around with basic setup tasks. It's nothing really awful, and I'm learning quickly, but this is not something you can just turn on and use. Well, maybe YOU can, but I confuse easily.

The first thing was something I knew but had forgotten. When you start an application, its menu appears at the top of the screen. Windows and X apps keep their menus in their own windows, but Apple has always done it this way. This is not a problem, of course, just something you have to get used to. Actually, I rather like it. If you choose "Hide Others" from the applications title menu, all other appplication windows go away, but you can bring them back on demand. This, in combination with the Windows style Dock (works like Windows title bar), is a very nice way to manage your desktop.

I'm having a little trouble getting used to the touchpad mouse also. Again, nothing wrong - it's just different. On my other laptop the touchpad can also do clicks by tapping on it. On the iBook, there's a separate click pad just under the touchpad; not at all hard to use, it just isn't what I'm used to. However, if you go to System Preferences->Mouse, you can change the trackpad so that you CAN click by tapping.

Another thing that I find disconcerting is the lack of confirmation buttons in many dialogs. You know, you call something up to change preferences and you click "Apply" or "OK" to confirm your changes. That sort of thing seems to be missing in a lot of places - you just make your changes and close the window. So far that hasn't been a problem (I haven't screwed up anything I couldn't fix), but I can see where it could be.

For example, one of the first changes I made was to Terminal. It defaults to tcsh, which I don't particularly like, so I called up its preferences and changed it. As you can see, there's nothing there like "OK" or "Cancel" - in fact there is no way to cancel. That's not so bad here, but in more complex dialogs where you may become confused, it's good to be able to just start over. If there's any way to do that here, I missed it. 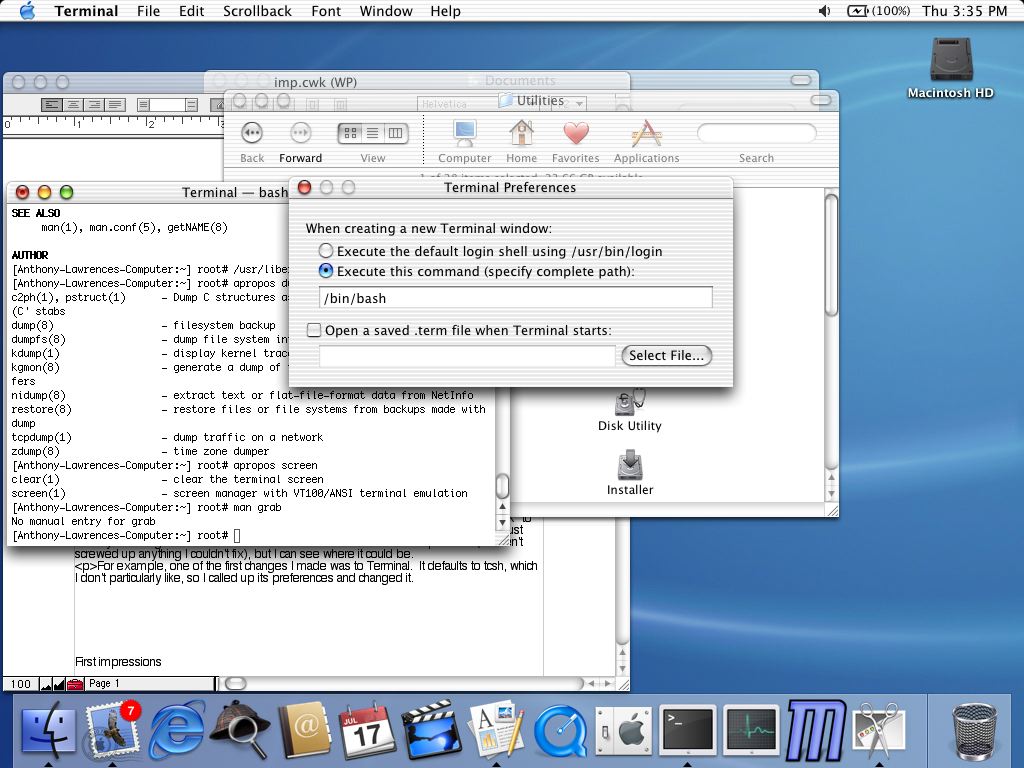 I think I like the built-in Mac OS X Mail client. I'm not entirely sure yet, and I have downloaded Mozilla which I'm used to using on Linux. The mail does have this nice spam control built in, which seems to be working well (it's still in training mode), but it only does mail - no Newsgroup capability. Because of that lack, I need Mozilla anyway. I'll play with it for a while and see if I still like it.

A lot of work to do

I have a bit of work to do before I can use this as my daily machine. I have a number of scripts on Linux that I use regularly for managing my website, my life, and other things. Fortunately, they are all Perl and Bash so I will have no real problems transporting them here, but it's just taking the time to do it.

Mac OS X is very seductive though - I'm going to have to steal the time to do this.

If you are considering an iBook, you'll probably want more than 256MB of ram. I find that very uncomfortable to work with (too much paging and swapping) and have already ordered a 512MB stick which will bring it to its maximum of 640MB.


you can use the touchpad as as clickpad as well, you just have to change the settings in the control panel.


I will get Mac iBook for my birthday present. I have have been told that mac is very different to windows. I am happy to get a mac laptop but it seems that I have lots of work to do to learn how to use it fully. I have red what other mac users have rote and it helps me to know what is ahead of me.


Several people have told me that my inability to suffer fools gladly is one of my main weaknesses. ((Edsger W. Dijkstra)