Amazon now allows anyone to buy Echo and has also announced a SDK that allows anyone to write application functions. That really fired me up, at least momentarily: I can think of many things I'd like to do with Alexa myself and at least some of those might be of interest to others. You can write in Json or Java, neither of which I have great experience with, but I do have a little and I was able to read and at least mostly understand the provided sample code. 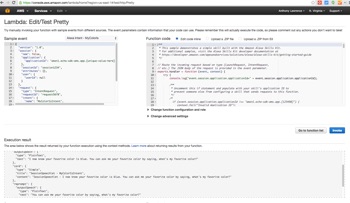 That's as far as I got, though. Amazon lets you deploy through AWS (Amazon Web Services). I was able to create an account and actually test some sample code, but when it came to getting that code to test on my Echo, I fell on my face. I think I followed their directions, and my Echo does try to respond, but it fails and I haven't a clue what to do next. From my point of view, AWS and this new SDK assume to much prior knowledge and leave out far too much. I do realize that I'm a crusty old dinosaur and my brain plasticity is long gone, so my point of view is probably completely invalid, but regardless, I had to give up. As much as I'd like to, I don't think I'll be developing anything for Amazon Echo.

Oh well. At least my brain was fired up and excited for a few minutes.

Other people will figure this out and I expect exciting things. Opening this up to let anyone create capabilities is smart. There will be a deluge of useful (and silly, of course) new features coming to Echo very soon!


We made the buttons on the screen look so good you'll want to lick them. (Steve Jobs)