I watched Ape Genius on PBS the other night and was particularly struck by two segments. The first had young children with an adult who showed them how to "properly" get a candy treat from a box. The method was intentionally complex, involving pointlessly tapping and moving levers that actually did nothing. Chimps were also taught the same procedures and both children and chimps learned how to get the candy.

The same experiment was repeated, but this time with a partly transparent box that made it obvious that the tapping and moving of levers was pointless. The chimps immediately realized that and skipped the unnecessary moves, but the children went on doing all the actions. 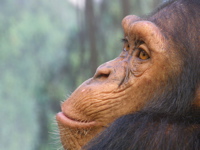 The Nova show attributed this to children having an expectation of education that the chimps lack - apparently chimps don't teach other chimps. There are other ways to interpret these results, the most obvious being the importance of ritual in the human psyche. I think another experiment might point that out:

In this experiment, chimps were asked to select one of two bowls of candy. One bowl would contain an obviously lesser amount, say two pieces vs. six in the other bowl. The catch was that the bowl the chimp selected would be given to another chimp, and the chimp who did the choosing would get the bowl they did not select. Obviously the chimp should select the bowl with the lesser amount of candy, but invariably they could not do that: their greed apparently overwhelms their judgment. That the chimps are capable of that judgment was shown by replacing the candy with numbers representing the ultimate reward; under those conditions the chimps could make the "intelligent" choice.

Humans use symbols far more than chimps do. We are masters of abstraction and indirection. Programmers know that perhaps even more than other people; our world is almost all symbols. But all of us, programmers or not, use symbols every day of our lives.

We also often use ritual, and rituals often involve symbols - Wikipedia even defines ritual as "a set of actions, performed mainly for their symbolic value..".

I think that the children assume that the ritual is necessary because it is intended to be symbolic.. of what may not be clear to them at the moment, but because they are already used to dealing with symbols, their minds accept that there may be other meaning in the "pointless" actions. Part of it may indeed be the expectation of teaching as Nova suggests; the children may suspect that actions are unnecessary but perform them because of the authority represented by the teacher (though that might indicate more fear than expectation). Or, as I suspect, they may see those actions as part of the "magic" necessary to get the candy - so much of a child's world is taken on faith, on the expectation that the reasons for many actions will become clear later.. and that, I think, is related to symbolism. The action isn't direct, the cause and effect aren't immediately observable, so it's symbolic, ritualistic. We humans accept rituals and symbols, apes apparently don't do so to the same degree.

The interesting thing is that acting as the chimps did is more intelligent in this specific case, but overall we do far better with symbolism and ritual than without. Acceptance of ritual lets us learn concepts that may not be understood at the moment but are needed just the same. Of course we carry it too far at times: humans learn many things that are neither true nor useful. But the advantages of this acceptance far outweigh the disadvantages.


Home
->
Opinion
-> Are symbols what makes us human?

i also right code for a living and i took was sent for a head trip about symbolism uniquely human. in addition to what you mentioned i found it telling that when learning numbers each number learned was equally challenging for an ape. great post!

It's getting very hard to see human intelligence as unusual and "special", isn't it?

This was very interesting. thanks for sharing


I'm sure the universe is full of intelligent life. It's just been too intelligent to come here. (Arthur C. Clarke)