I do not hate Windows 10
© November 2015 Anthony Lawrence


I use Apple computers, tablets and phones. I have long been disdainful of Microsoft and its incredibly crappy operating systems, so this is going to be a surprising comment: I do not hate Windows 10.

I will quickly add that I'd still rather have a Mac and I honestly think that you would too if you gave it half a chance, but I have to admit that if you do go the Windows 10 route, you aren't doing anything horrible. You'll probably like it. Unlike every previous version of Windows I have had the displeasure to experience, Windows 10 is quite decent. 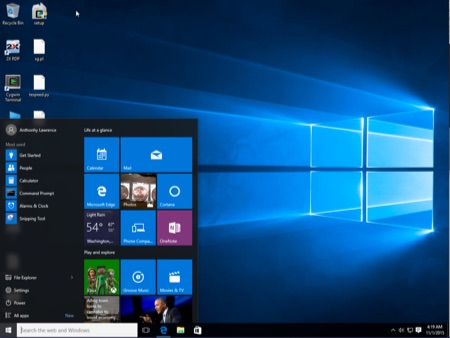 I upgraded and existing Windows 8 machine that had previously been Windows 7 running in Parallels Desktop on my iMac. I say "running" with tongue slightly in cheek because I rarely fired it up except when I needed to figure out why some friend or customer was having problems with their own system. The virtual machine was always somewhat slow and that only increased my frustration levels, so I avoided it other than for those reasons.

This week I let Microsoft convert me to Windows 10. My expectations were low because I have been prejudiced by years of junk from the fine folks at Redmond. I didn't pay attention to how long the upgrade process took, but I do know it was shorter than I expected.

After it was complete, I logged in with trepidation, expecting not to be able to find anything. I was prepared to Google and be highly annoyed.. but I was not. The system was crisp and clean and I had no trouble finding anything. I was particularly impressed by how responsive it was, even though hampered by running in a virtual machine. That usually guarantees substantial performance degradation, but I honestly did not notice any.

So there it is. I do not hate Windows 10 and I am as surprised as you are.


I was taught that the human brain was the crowning glory of evolution so far, but I think it’s a very poor scheme for survival (Kurt Vonnegut).