At Vista Home Premium - Installation I explained how I installed Vista on a very low end machine and was somewhat surprised to find that it performed at all. However, I did not get too far as Vista didn't like my NIC.

It's true that every Linux I ever put on this long suffering machine recognized and used this NIC, but I can hardly fault Vista: when I pulled it out even I was surprised to see that it was a Kingston KNE100TX - had I really put THAT in this box? I guess so - you know how it is, you are throwing something together and you throw in what you have at hand.. in my case, it must have been that.. and Vista didn't like it.

So today I stopped by Best Buy to try to find a suitable card. All they had were wireless cards, so I drove over to Office Dept and found a Netgear FA311 - the box said Vista compatible, the price was silly ($16.50) but what the heck, I was there, I wanted to do it today, so I bought it.

Upon returning home I popped it in right next to the existing card - this machine probably won't have Vista on it very long and it's always good to have more than one card.. well, it can't hurt unless you are trying to install Vista, I guess. Vista only saw the "bad" card - the card it had no drivers for. I had to physically remove the Kingston before Vista could see the Netgear. I guess since this isn't a server OS, why look beyond the first card you see? Brilliant Microsoft logic.

However, after that this just worked. I "activated" and was now free to explore Vista. And there's the rub.. I'm so Anti-Windows that I had no interest in exploring anything. I know I'm going to trash this whole installation within a few days and never look at it again so it's hard to get excited.

But I gritted my teeth and dug in. First: can this puppy see other computers on the network? I clicked on "Network" and then turned on "Network Discovery and file sharing", and ayup, within a second or so the other machines on my Network appeared. However, the shared folders on my Mac did NOT appear - does Vista not like Samba? I suppose that's a stupid question..

How about sharing a folder from here? I created a folder, right clicked on it and chose "share". This then sent me to the "Network and Sharing Center" (made me think of people in tie dyed shirts serving communal soup) where I turned on "Public Sharing". Son of a gun, the Vista box popped up in my Finder window on my Mac.. but when I tried to actually open it, it failed. I'm beginning to think Vista doesn't like Samba very much..

Well, I had not set "Password Protected Sharing" to "off". Maybe that's the problem? Well, no immediate success after that change, but maybe it or the Mac needs some time to sniff each other and decide what they think about a possible mating.. I'll give it a little time. In the meantime, back to Vista.. umm, where's "Start->Run"??

Oh, yeah - almost forgot: Win-R. Good thing this keyboard HAS a Win key - first time I've ever used it! Actually you can right click on the Windows icon that has replaced "Start" and reenable "Run" in Start Menu->Customize so I did that - even though I'll be trashing this soon, I will probably want Start->Run again soon. For now, I did Win-R and "\\Macbook-2" but again it showed nothing but "Printers" .. stupid Vista, even the XP machine can do better than that!

Back to the Mac again.. I tried "Connect as Guest" and yes, now I can connect, but to my surprise, it did not show just the one folder I had shared.. it showed a BUNCH of stuff! 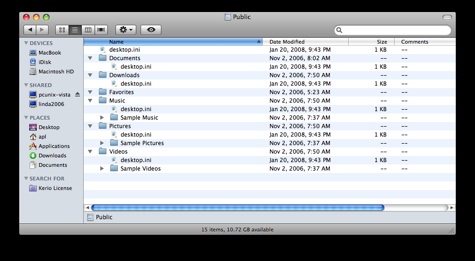 So Vista just automatically shares all that by default? How presumptuous can you get?

Next question: how do I map a network drive? It's not immediately obvious.. and oh, by the way, where the heck is Help?? It's not at the top of open windows, but fortunately it is in Start.. and that's how I found that "Map a Network drive" is now under "Computer".. I do not like this new Vista non-menu menuing..

OK, enough.. I can't take much more of this. Obviously Vista's ability to play nice with other systems is typical Microsoft isolationist policy and that's only one of the many reasons why I could never use this as my daily OS (the others being lack of a decent shell, and that Microsoft is Not Unix). However: I am impressed and surprised by how decently this performed on minimal hardware.. not only that, but I realized that while I thought I had 512MB in this box, closer inspection showed it was only 384MB - below Vista's bare recommended minimum, and yet the darn thing actually worked! Sheesh, maybe I ought to dig through my boxes and find some more RAM.. but no, that wouldn't help: it's still Windows.

Tell me this: Why do new Explorer installs NOT have the menu bar shown by default? How are new users ever going to realize that IE has Tabs?


Tony, I had the same problems you did with the NIC on my old desktop (was using Vista Ultimate, but drivers would be the same). I tried two different NIC's that had worked with XP, and every Linux or BSD I threw at them. But I guess they are too "old" - umm, they are only 4 years old...

Anyway, I finally got it running by removing the NIC and using the onboard ethernet - but I still had to trick it by installing chipset drivers from a newer chipset (thank goodness for forums).

Makes me think - all of the people who say if you run Linux or BSD that you'll be stuck in forums searching for ways to make drivers work... not so in this case, it was the other way around. I think I'll convert the box to Ubuntu when 8.04 comes out.

On a non-related matter, I wish MS would release Server 2003 or 2008 as a Workstation (or at least price it so). Nothing says you can't use them as such, and they are much snappier than Vista.

They need to do something - nobody likes Vista, including many of their own top level people!

But honestly, I think they are getting ready for a big swan dive.. their day in the sun has passed.

Couldn't happen to a nicer bunch :-)


I don't much like vista, XP is ok, as far as linux I love the stability and would gladly use it 100% (if only 1. I could find a USB wireless driver for my d-link wua-1340 and 2. if there was some way to use my ipod with linux) looks like im stuck with mac os x. I'm kinda hoping that MS will trash there vista project all together and start fresh, it would be a good move for them....

Weill, without actually coming out and admitting it, I think they have exactly that plan.


One in a million is next Tuesday. (Gordon Letwin)