Lightning Cables, Charging and all that
© May 2019 Anthony Lawrence


Apple’s Lightning Connector has disappeared from the iPad Pro. We don’t yet know if it will remain on phones, but certainly many of us would be happy to see it replaced by USB-C. Actually, I would love to see everything replaced by USB-C just to reduce cable floundering when I need to connect something.

But while it’s still here, let’s dig in a bit. First, did you know about Lightning and its connection to Harley-Davidson? Yes, those motorcycle folks had a trademark on Lightning, so Apple had to buy the right to use it for these cables. Wikipedia says that Harley-Davidson didn’t entirely give the trademark over and probably can still make a Lightning motorcycle if they want to (1).

Lightning cables aren’t just wires in a sheath. They actually have electronic chips inside (2). One dynamically assigns pins (that’s why there is no wrong way to plug it in) and one makes it “certified”. The chips detect what kind of device is attached: does it send power or need power. And of course it’s not just power as it can transmit data and audio in either direction also. Is it really surprising that it isn’t inexpensive?

There’s a serial number printed on the cable. It is faint grey and hard to see; I need 10x magnification. It’s nearer to the USB end if you want to look for it. 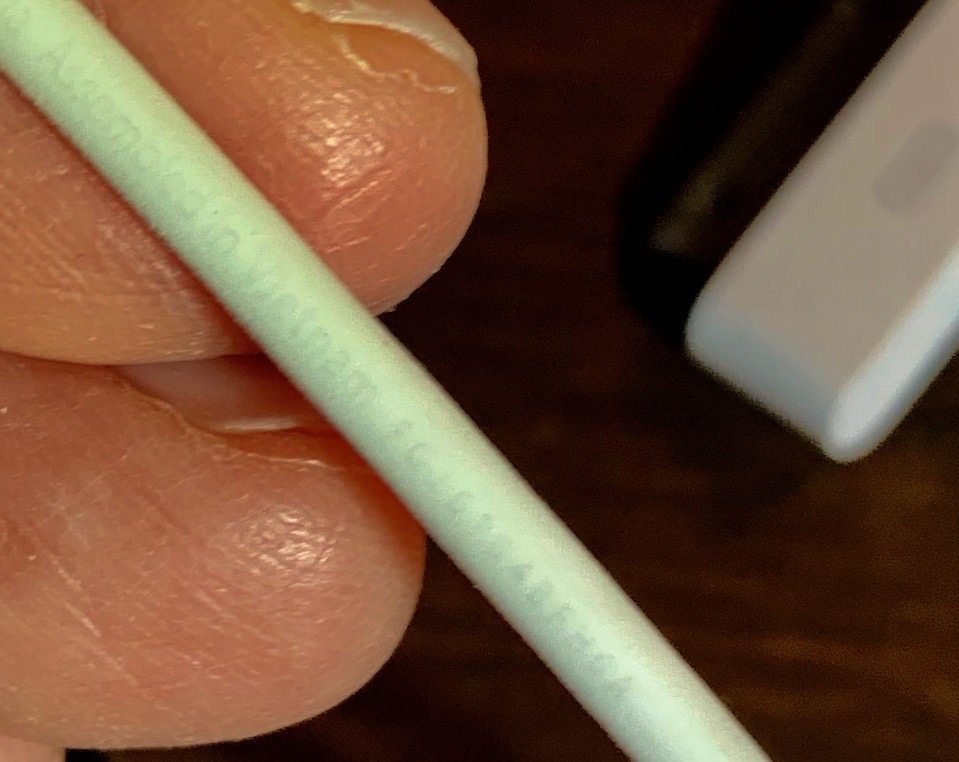 Some people complain that Apple cables wear out quickly. I don’t think that is true as I have many Lightning cables I have used for years. But I am careful to grab the cable right at the hard plastic part rather than tugging the cable itself. Still, as the “Hardware comparison: Lightning connector vs MicroUSB connector” article (3) in the Reference section notes, it’s much more durable than MicroUSB!

Belkin lightning cables are even more expensive than Apple cables, but are supposedly made to be tougher with Kevlar and double braided Dacron nylon. They say these cables are tested to over 5,000 bend cycles. Dacron is used for parachute cords and high-pressure firehoses. That is tough stuff!

What about charging? The little 5 watt wall plug certainly isn’t fast and the new 7.5 watt wireless chargers aren’t that much better. For newer phones, the 12 watt iPad charger (which costs exactly the same as the 5 watt) will charge much faster. You could also use one of the higher wattage MacBook chargers, but you won’t gain much above the 12 watt charger. Mac Rumors found only about a 10 percent difference between using the 12W iPad charger and jumping to the higher watt USB-C chargers (4).

Fast charging is actually called USB-PD (Power Delivery). Devices request higher currents and supply voltages from chargers, up to 2 Amp at 5 Volts (for a power consumption of up to 10 Watt), and optionally up to 3 Amp or 5 Amp at either 12 Volt (that is 36 Watt or 60 Watt) or 20 Volt (that’s 60 Watts or 100 Watts). As it’s the devices requesting power, older phones won’t charge faster because they don’t ask for more. On the other hand, the product information page at Apple (5) for the 12 watt charger says you can use it all the way back to the iPhone 5 - it just won’t gain you any time.


The only thing I'd rather own than Windows is English. Then I'd be able to charge you an upgrade fee every time I add new letters like N and T. (Scott McNealy)