Recently I had downloaded a csv file with the intention of extracting some data to satisfy my curiousity about something. I wrote a little Perl script to slice and dice the data, and that would have been that - except I wanted to know something quickly from the original file, so I did something like "grep whatever 2003.csv".

I got back nothing.

That's odd, I thought. I know that "whatever" is in there. So I fired up vim and did "/whatever" and, sure enough, there it was.

So why couldn't I extract it with grep? 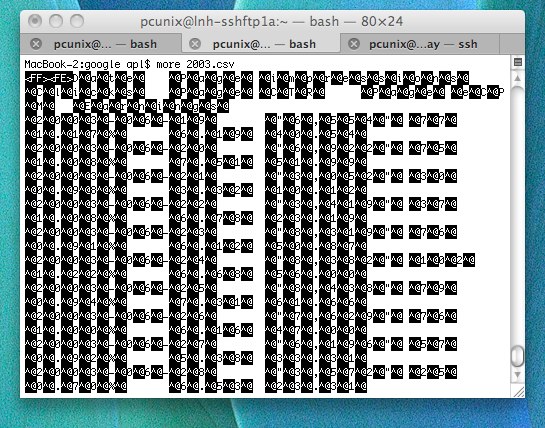 So, what can you do if faced with this situation? You have a few choices. You could ask vim to rewrite it. That's easy:

Vim can do all sorts of file encoding rewriting; see Using another encoding in the VIM docs.

You could use Perl to rewrite the file, though Perl has some funny ideas about what utf8 means, plus some other oddities here and there.

At the Terminal command line, you can use "iconv":

Though that gets old fast, so I just converted the file.

Wouldn't it have been nice if we never had 7 or 8 bit encodings?

No such file or directory error message

Had a client on a Red Hat system complain that he was getting an error from cron. A script in cron.weekly complained about "No such file or directory", but the file was there - it made no immediate sense.

The error seemed rather definite:

I figured it was going to be a symlink problem or an incorrect shebang line, but no, everything looked fine, and you'd get the same error running it from the command line.

I kept looking and looking at this until I noticed that while editing it in vi, a little "[dos]" appeared next to the file name at the bottom of the screen.

Ahah. A "file proc*" confirmed that this had CRLF line endings. But normally I'd expect to see ^M's in vi; I didn't. That puzzles me a little, but since the script was just a one-liner, I removed and recreated it manually and now of course it works.

You can also do:

and then write the file, you'll convert dos or mac file endings to unix.

You can be more verbose if you wish:

Nowadays, you may run into UTF-8 vs. UTF-16 problems too. See Converting File Encodings


This happened to me also. Been beating my head against the wall why CRON was complaining. This worked!!!!

What happens if you do this?

You would expect it to because "cat" will show the file, but it does not.

Thanks so much for this- you hit on *exactly* what I was trying to work on, and I really appreciate you sharing this. absolutely made my day and saved me a bunch of time.


Yeah, it's obsolete, clunky, insecure and broken, but people still use this stuff (Tony Lawrence)