I've blown up a few motherboards, had to put up with a dead rat and knocked myself out by running into a door jamb while frantically trying to get to a smoking computer..

But that's just me. What about the poor computers?

I once found a very jammed up laser printer. The cause? Lovely fresh plastering in the computer room. The humidity had to be near 100% - it was ready to rain in there any minute. Laser jets don't like slightly soggy paper and I'm sure they like it even less with a nice coating of plaster dust to top everything off.

I'm sure we've all seen dusty computers. I found one so jammed with dust that you might have been able to gather it up and knit a small sweater. I pulled it out by the handful. The funny thing was that the only reason I opened it was to change a dead tape drive - other than that, it was running fine!

The worst I ever saw was in a shop where they did metal grinding. I went in to do an upgrade, and I needed to take the old drive out because they had no tapes. The entire machine was coated inside and out with greasy oil and it HAD to have metal filings in it but the damn thing was still running- absolutely astonished me!

Let's save some money

A thrifty customer decided there was no reason to waste money on air conditioning over the weekend. Top floor of a brick building with a flat asphalt roof, tiny closed up server room.. Monday morning found three dead servers, two of which stayed dead. Saving a few hours of A/C sure paid off! 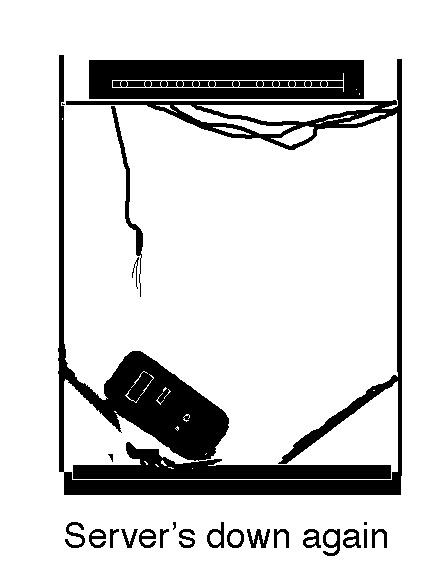 Light bulb? No, not recently, boss

A "server down" call was literally true: the server had fallen off a shelf. Just how that happened is unknown; we think someone was changing a light bulb, but nobody admitted to that. The server did not actually reach the floor: the power cord yanked out, but the computer was hanging on, suspended by its ethernet cable.

What is that smell?

"Nothing's working and something really smells in the server room!" As I had come to do a software upgrade, I wasn't expecting that as a greeting. I could smell burnt electronics as I neared the room and of course expected to find a cooked server. This would NOT be a happy day, but when I entered the room both servers seemed fine - the screens were up, I could log in - so where was the smell coming from? I checked the UPS; that was fine. I looked around, a bit puzzled. The only other thing in the room was a 16 port switch.. kind of old looking and now that I looked at it not a single light was blinking. I put my hand on top of it and jerked back instantly - that sucker was hot! Well, that was an easy fix, though I had to make do with stringing together three 8 ports as that's all they had at a local store.

Did you finish that coffee?

This was more odd than harmful: I opened a computer and found an empty but used paper coffee cup sitting inside. It's just so hard for me to imagine how you could not notice that as you closed up the case..

But I'm guilty of worse

Yeah: I've used folded cardboard and duct tape to hold a hard drive in place "temporarily" because I didn't have the right mounting rails. I know that *I* never went back to set that right; I wonder if anyone ever did?

Under the innocent sounding title of Maintaining a network is a recounting of more computer disasters and things that should have been but somehow were not, including this gem:

10. I found a very nice looking UPS in a dumpster. It was heavy, but I dragged it home, up 50 stairs, and onto my workbench. When I plugged it in, it seemed to work so I let it charge. Several hours later, I was cleaning up the acid spill that wrecked my workbench, some expensive toys that were also on the bench, and started to eat through the floor.

My favorite was the case of the errant vacuum cleaner. One of our clients was a bank in Chicago where each teller had a PC that was actually a desktop unit (a "pizza box") standing on its side on the floor underneath the counter. Hardly a week went by where we wouldn't get a call that so-and-so's PC is dead and would you please come in and fix it. Invariably the problem was a failed hard drive. It got to the point where we were maintaining a stock of ready-to-install drives with Window$ already loaded.

The mystery of why so many drives were going south was solved one evening when I was at the bank working on one of the servers. I heard someone vacuuming behind me and when I turned around, an enormous woman, wielding a Hoover commercial unit that looked like it could derail a freight train if it got in the train's way, was cleaning around the teller stations. As she worked she would periodically smack a PC with the vacuum cleaner. I watched with a mixture of disbelief and horror as she succeeded in knocking over one of the PCs, which was powered up. Needless to say, when I went over to check the PC I found a dead hard drive.

I quickly grabbed a camera I happened to have with me and snapped some pictures of what was going on. This was back when we still loaded film into cameras, so the following morning I went to a one hour photo joint to get the pictures developed. I then went over to the bank and dropped off the pictures with the vice-president's secretary, along with a note explaining what they were all about.

I never saw that cleaning lady again and I noticed that her replacement was very careful when vacuuming around computers.


All of science is nothing more than the refinement of everyday thinking. (Albert Einstein)