Is it worth resetting content and data in IOS to fix issues?
© October 2015 Anthony Lawrence

Is it worth resetting content and data in IOS to fix issues? I have strange issues that cannot be resolved normally.

I would say definitely yes, assuming you've tried everything else first, of course.

I recently decided to do this because Apple News in IOS 9.1 was constantly crashing a few seconds after loading. I tried all the usual tricks, including resetting settings, but News still crashed.

With any other app, I'd just delete the app an try reinstalling, but Apple stupidly doesn't let you do that with News and a number of other built in apps. Nor do the let you trash the data for a specific app, which would be another very helpful way to solve problems like this. 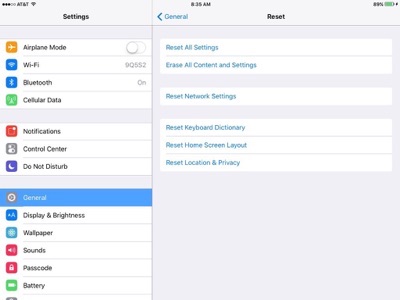 After resetting content and data, your device will connect to your wireless network (you'll need your password/phrase) and then ask for your Apple ID. It will then offer to restore from backup. I declined that offer as I did not want to bring back any existing problems. Instead, I just went to the app store and reinstalled every app I need.

Interestingly, doing this cleaned up over 5 GB of free space. As my iPad is old and only 16GB to start with, that mysteriously hidden data may have been what caused News to crash. News now works again, so the total reset certainly fixed that. Yes, it was somewhat annoying reinstalling and configuring apps individually, but in this case at least, the results were worth the effort.


Home
->
Forum
-> Is it worth resetting content and data in IOS to fix issues?


Perl is designed to give you several ways to do anything, so consider picking the most readable one. (Larry Wall)