Regular readers here know that I react badly to titles containing "Unleashed". That's probably why I forgot to review this even though I've had it since January of 2009.

I suspect I probably glanced through it back then but then got busy with something else and forgot all about it. My recently awakened interest in iPhone/iPad programming caused me to go dig this out and take another look.

OK, I hate the title. The book itself is decent enough in spite of the title.

Not that I bothered to read it when I started using Xcode.

Why would I? It's pretty obvious what you need to do to compile and run code. Sure, there may be a zillion buttons and menu choices, but I probably won't need them - let's just get going!

Yeah, well that worked - sort of. You can just wander in and use Xcode without really knowing all that much about it. However, you'll probably miss things that can really add to your productivity.

I'll just give one example of an Xcode feature that I missed but now use frequently: Code Focus. Here I am looking at a section of a project: 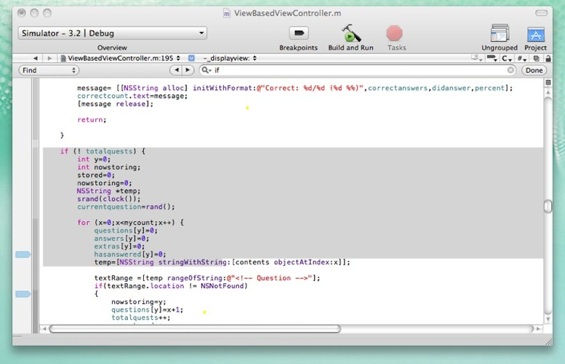 If I'm really not interested in the "if (! totalquests )" block, I can just click in the gray ribbon to the left and collapse that entire block: 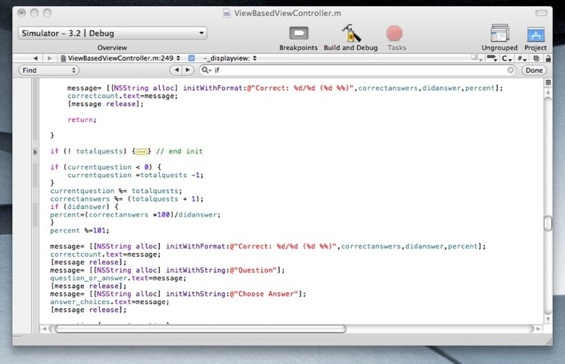 Minor thing, but very helpful, and there are dozens and dozens of little features and tricks that you might eventually discover, but can learn much more quickly with the help of a book like this.

I did notice that several Amazon reviewers objected to this book on the grounds that there is nothing in it that can't be found in Apple's documentation. That's absolutely true, but the presentation is different and sometimes it can be quicker to look something up in a book than in Apple's docs (and sometimes it's the other way).

On the other hand, for a book about Xcode, it spent an awful lot of time in the details of a fairly esoteric application for calculating linear regression. OK, a "Hello, World" example is definitely too basic to show off many features of the IDE, but was it really necessary to be this complicated? I think the choice of project detracts from learning Xcode itself.

So, mixed bag. No doubt it will soon be completely out of date, so if are thinking of buying it know, I'd suggest clicking on the "Used" button - this is probably not worth paying full price.

Order (or just read more about) Xcode 3 Unleashed  from Amazon.com. Yes, I earn a small referral fee if you use that link to purchase the book.


There are two major products that came out of Berkeley: LSD and UNIX. We do not believe this to be a coincidence. (Jeremy S. Anderson)